This book discussion series is tailored for veterans and their families. We are privileged that is led by Vietnam veteran, author, and College of Southern Maryland professor Wayne Karlin. Service members of all eras, their spouses, and adult children are welcome.

This year we will read and discuss four non-fiction books: a former infantryman exploring how to be a parent; a former Navy pilot struggling with the tug between pride and guilt about his service; a journalist discussing in detail the erosion of honor in an elite force; and a former nurse’s very personal memoir of loss and trauma from World War I. Each book is written in a very different style but connected by themes of war, courage, honor, and trauma.

Meetings will be held the first Saturday of the month 10 am - 12 pm via ZOOM. Participants should plan to attend all sessions. Materials provided. Book descriptions are from Amazon

The Veterans Book Group is coordinated statewide by Maryland Humanities and is presented locally in partnership with St. Mary’s County Library. It is supported in part by Lockheed Martin, David Bruce Smith, and the Wawa Foundation. 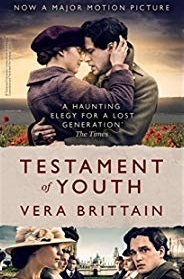 Wayne’s note:  I think this is one of the most devastating accounts of World War One. It is told not by a soldier but by a woman from a sheltered background who volunteered as a nurse and suffered the severe losses that marked her generation.

In 1914, Vera Brittain was 20; when war was declared she was preparing to study at Oxford. Four years later, her life - and the life of her whole generation - had changed in a way that would have been unimaginable in the tranquil pre-war era.

Testament of Youth, one of the most famous autobiographies of the First World War, is Brittain's account of how she survived those agonizing years. Brittan recounts how she lost the man she loved; how she nursed the wounded and how she emerged into an altered world. A passionate record of a lost generation. It made Vera Brittain one of the best-loved writers of her time. This book has lost none of its power to shock, move, and enthrall readers since its first publication in 1933.